How Many Carbs Should My Toddler Eat? 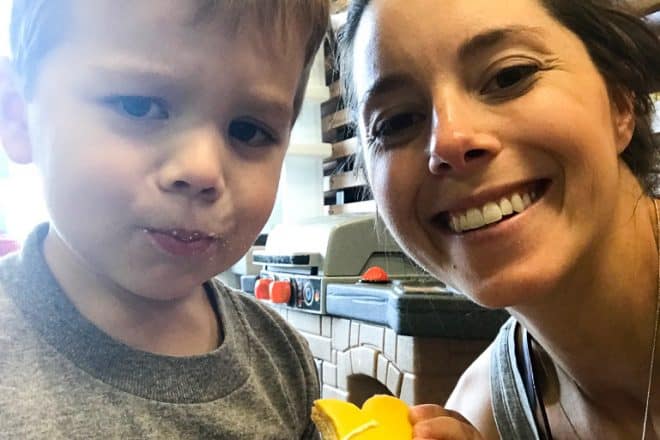 Moms, do you wonder if it’s okay for your toddler to constantly be eating carbs? Are they still getting the nutrition they need?

Do you ever feel like your little one’s meal is only “healthy enough” or “good enough” based on how much protein and veggies they eat?

Are you a protein pusher, asking your kids to eat more of their meat, after they gobble up all the carbs on their plate?

Or do you worry that they are NEVER going to eat their green veggies, if they also have carbs to choose from on their plate?

Carbohydrate Amounts for Toddlers and Kids

We tend to serve meals that have a focus on protein and veggies when we want them to be healthy, but for kids, that’s not the only important part of their meal. Carbs should make up 45-65% of your little one’s diet. So if you feel like they want all carbs all the time, and rarely want protein…they are probably right on target.

Little kids’ bodies and metabolism are WAY different than ours as adults. So even though low carb and ketogenic diets are really popular right now, we have to shift our thinking about what is healthy when we talk about little kids. (I’m not necessarily saying low carb/keto is healthy, because the answer is really “it depends,” but I’m not going on that tangent now.)

When you look at your little one’s plate, or what they eat in a day, it’s totally normal for it to look kind of opposite of how your plate may look. Your meal of grilled salmon and veggies is likely not going to be as satisfying to your kid as it is to you. I’ll say it again… that is totally normal.

Carbs are a kid’s body’s favorite source of fuel for growing. They don’t need a big serving of protein like we tend to serve- like a chicken breast, or a burger, or even a whole egg.⠀

Protein Amounts for Toddlers and Kids

Protein intake can be as low as 5% of their total diet and still be on target if they are 1-3 years old. That means taking a bite here and there of protein foods really is enough for them!

That’s still not much when you think about it in terms of what’s on their plate. 5-10% of a meal is probably 2 or 3 bites worth. I just want to get the message across that if it looks like they barely touched their protein, that’s okay. We tend to serve them more than they need.

I talk more about specifically calculating protein needs in this post.

Fat Amounts for Toddlers and Kids

Carbs should be a part of every meal, and most snacks. Little kids burn through energy quickly. Adults sometimes say they feel sluggish or tired after eating a carb heavy meal. Have you ever noticed that with your toddler? I bet the answer is no. I would bet that their energy seems to multiply after eating a plate full of carbs!

But let’s talk about good and bad carb choices. No foods are totally off limits, but I recommend limiting added sugars. Sweets and treats are fun, but they shouldn’t be the first string quarterback. (I know nothing about football, did that make any sense? Ha!)

My “every day” carb list contains foods that you can feel good about serving, well, every day. These are foods that you don’t need to restrict or limit even if you are nervous your child is eating too much of them.

Well Balanced Meals Have At Least One Carb Choice

At meal time, always plan to serve one or more carb choices. I often suggest that moms serve fruit with each meal, because little ones typically love fruit. And you can have peace of mind that they are getting vitamins and minerals with their meal.

You don’t have to worry if they inhale their fruit or other carbs and then don’t eat too much of their other foods. If their meal ends up being about half carbs, that’s what their body is asking for and what it needs. Sometimes it will be more than half, or even all of their meal! That’s okay, too. Generally, their diet evens out over the day or over a couple days. (But if it doesn’t, shoot me a message. Some kids won’t touch ANYTHING besides carbs, at all, and I have helped several families with that.)

Here’s an example of a normal day of eating for a 3 year old.

Let’s talk about snacks. Most of the snacks kids love the most are refined carbs like crackers, cookies, and chips. And goldfish. I think they are probably the favorite toddler carbs (why do they love them so much??).

If you’ve ever eaten these foods, and I’m sure you have, you know first hand that they taste good, and can taste better than their real food counterparts. No matter how hard I try to convince my son that my baked sweet potato “chips” are just as good as packaged veggie chips, he knows I’m lying.

This is typically what stresses moms out the most. “She ate a giant stack of crackers for snack, and then didn’t eat any of her dinner!” “I try to serve just a small amount of goldfish, but he cries for more!”

I’m going to be posting about this in the next few weeks!

To get the post sent straight to your inbox, fill out the box below —

[…] If you’re worried about your little one getting enough protein in their diet, you can typically increase their protein with real foods, instead of relying on supplements. Toddlers only need around 15 grams of protein per day. To calculate for your child, divide their body weight in pounds by 2. They can get that from about two cups of milk, for example. Read more on protein needs for toddlers here and here. […]

[…] protein in can definitely be a struggle at times. Though their protein needs are low compared to adults, they do get great benefit from having some protein in their meals. Not only […]

What To Do When Your Toddler Won’t Eat: Expert Advice & Tips from a Registered Dietitian

Toddler not eating? Get expert advice from a Registered Dietitian (and picky eater mom!) on what to do, when to worry & when to let them be.

How To Make Kid-Friendly Summer Dinners

Inspiration for 19 full days worth of healthy toddler meals your child will actually want to eat! 19 breakfasts, lunches, dinners, and morning and afternoon snacks, plus 2 full days of vegan eats!