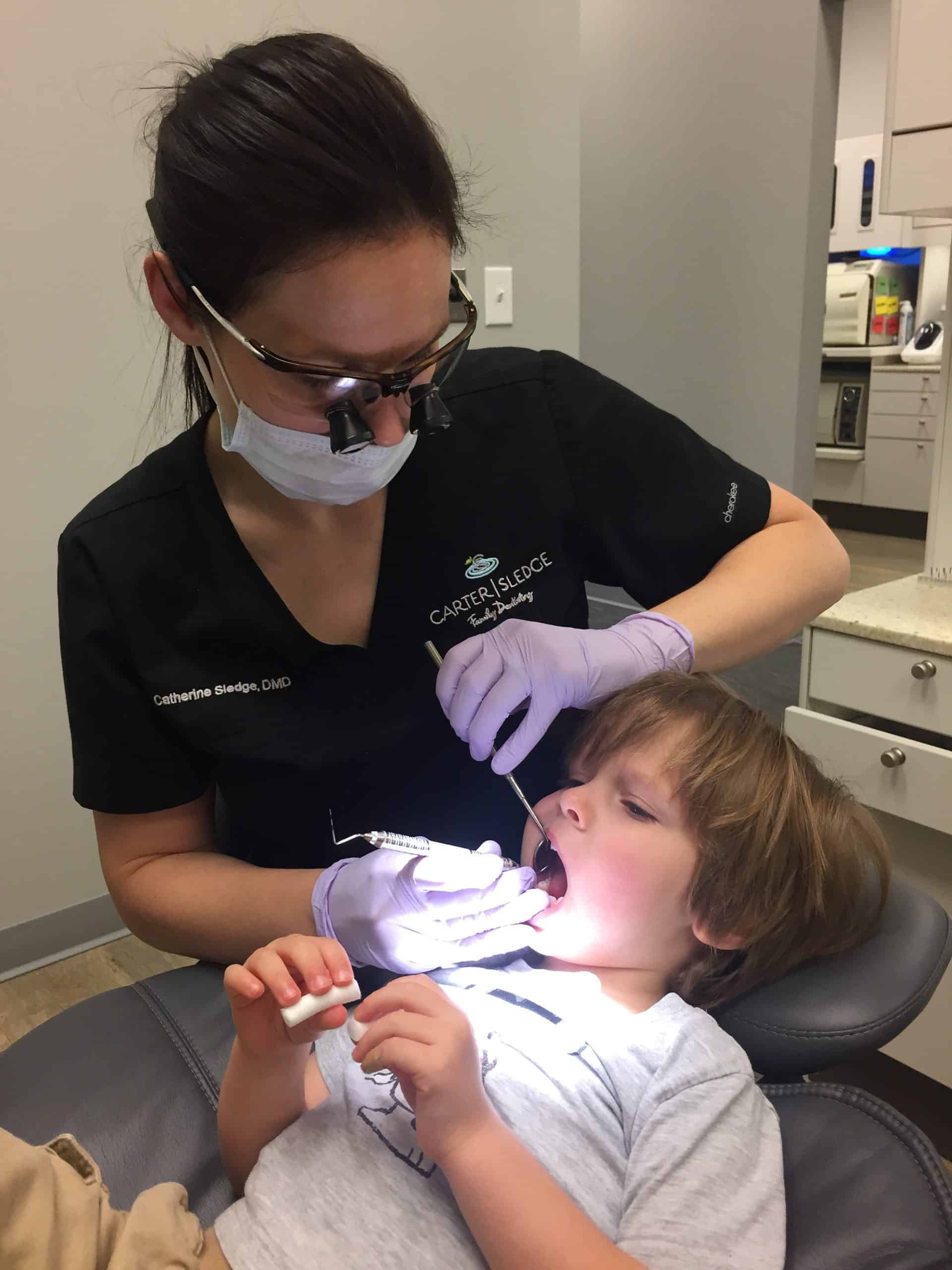 If you haven’t heard anything about today’s topic yet in day-to-day life, I think it is safe to say that you will soon! A common abnormality affecting children and their ability to feed well is something called ankyloglossia, or “tongue tie”. With an incidence rate somewhere between 2 and 10 percent of the population, if you or your child hasn’t been affected by this issue, you are bound to know someone who has!

I recently chatted with Dr. Catherine Sledge, a Pediatric Dentist, to find out what we, as parents, need to know about how tongue tie affects babies and toddlers.

Wondering how this relates to pediatric nutrition? Well, picky eating in toddlerhood, as well as several other feeding issues we will discuss, can actually be symptoms of tongue tie or other tethered oral tissues.

tongue to the floor of your mouth? If not, try lifting your tongue up, and use your fingers to feel

For it. (Yes, really! Try it!) This tiny string of tissue is called a frenulum, and although every person has one, some people are born with their frenulum either too tight or too short, and this abnormality can cause a myriad of symptoms that affect your baby or toddler,

as well as nursing mamas!

Q: How can I tell if my toddler is tongue tied?

There are three main areas of concern when it comes to toddlers and tongue ties.

Does your little one have trouble with certain foods or textures?

When a child is tongue tied, the tongue is not able to adequately move food from side to side, as in chewing. This can lead to problems like:

Because the fully functioning tongue impacts and helps drive the growth and development of the palate (i.e., the floor of the nasal cavity), the size of a child’s airway can also be affected. This compromised airway development can lead to symptoms like frequent night wakings, thrashing around at night during sleep, and even more serious conditions like sleep disordered breathing (SDB).

It’s crazy to think that a tiny string under the tongue can have such a huge impact—but it’s true!

Toddlers and preschoolers are learning and growing at an AMAZING rate. Their little minds and bodies are constantly moving and learning new skills. Speech is one of them.

Consider this: a child learning to speak with a tongue tie is similar to a child learning to run with a thick rubber band fastened around his ankles. Imagine the muscular, emotional, and mental efforts that a child would have to make in order to move at a normal rate, or at a rate comparative to others his age. Imagine how much harder she’d have to work!

Common speech symptoms that may indicate a tongue tie include:

Considering your toddler’s breastfeeding/early feeding history is also an important factor in ruling out tethered oral tissues like a tongue or lip tie. If your toddler was or is breastfed, how did it go? Was it a seamless, painless process for both mother and baby, or did it come with many struggles and tears?

Common symptoms of tongue ties in infants include:

For a nursing mom, symptoms are the following:

Some additional food for thought: many well-meaning pediatricians may prescribe reflux medication to young children and babies in an attempt to serve their patients well and help mom and dad fight reflux. But, tongue ties are often sneaky….and their symptoms can mimic those of reflux.

When the tongue is tied, it does not have its full range of motion. Because of this, baby may swallow significant amounts of air, leading to something called Aerophagia Induced Reflux (AIR). The gassiness, fussiness, and heavy spit up associated with reflux can also be attributed to a tongue tie.

So, before going on meds, it is important to have your child evaluated by a medical professional who treats ties regularly. This person may be a pediatrician, a dentist, an ENT, or a lactation consultant.

Q: If a baby isn't breastfed, would you notice any problems with a bottle?

If a baby is bottle fed, yes there will be signs of a tongue tie.  However, sometimes they can be slightly masked.

With breastfeeding, maternal pain is most likely going to be a factor.  With bottle feeding, obviously that won't be an issue, but many of the other symptoms remain the same.  Extremely prolonged feeding times, milk leaking out the corners of the mouth, reflux, excessive gassiness or fussiness, poor latch, poor weight gain--these are all potential indicators of a tie for both bottle and breastfed babies.

Q: Is it possible to have feeding symptoms with food, and not have had signs sooner?

Yes, it is possible to begin seeing signs of a tie only when starting solids. In these cases, it may be that symptoms have only just now shown up, or more likely that the early stage symptoms were masked by using a larger size nipple in baby's bottle, by mom having an oversupply, or by some other compensation for the tie.

Whether the symptoms have just started, or have been occurring since infancy, it is important to rule out a tongue tie.

Q: Does a tongue tie always need to be released?

Every child is different, with a unique medical history and situation. But, in almost all cases, yes. If the tissue is tethered, it is not going to stretch out or go away. It would be best to release a tie if one exists. It will help give your child the best foundation for health.

Q: Where can I go to have my child evaluated for a tongue tie?

Those who treat tethered oral tissues have had to seek out continuing education on the topic, as it is not currently taught in any significant form in traditional medical or dental schools. For this reason, and because unfortunately not all medical professionals stay up to date with current research, finding an experienced provider can be confusing.

You may have had a trusted pediatrician or ENT tell you that everything looks ok with your child’s tongue….but your gut is telling you that something just isn’t right. A good list of questions to ask as you evaluate who you’d like to do your child’s exam might be:

This will give you an idea of that particular provider’s experience, as well as some confidence in their depth of knowledge on the subject.

Love Learning From The Experts?

Each month, I’ll be interviewing a different expert in toddler-related health and wellness fields. Be sure to subscribe to my emails list so that you get notified each time a new post goes live!

Is My Toddler Overweight?

The information you need to look at your child’s growth as a whole, and to set yourself free from tracking, comparing, and worrying.

Plain enough for picky toddlers, packed with nutrition! This simple pasta with sauce recipe is a healthy alternative to mac and cheese.

How to Deal with Burnout as a Mom (Guest: Dr. Ashurina Ream)

Note: this post contains affiliate links. I earn from qualifying purchases at no extra cost to you. I told my husband I felt like an old sponge the other day. And then I talked to Read more…