Morning sickness is unavoidable during the first trimester, and it can make those first several weeks of pregnancy feel like a punishment. I have some tricks to get in healthy foods here and there, and it really makes a difference in how you feel!

When I found out I was pregnant with my second baby, I was in the middle of a post-holiday diet reset of sorts. I felt like I overdid it on the treats over Christmas break, like most of us. So in January/February I was really focusing on eating lots of veggies, home cooked meals, and had cut out sugar, alcohol, and refined foods. I was feeling A-MAZ-ING.

So when we got the positive pregnancy test (yay!), I knew it was just a matter of time before I would be too nauseous to stand the sight of a vegetable, let alone put one in my mouth, willingly.

The morning sickness nausea set in around 6 weeks. And I have to say, I am so lucky and grateful that all I’ve dealt with in both my pregnancies was nausea and food aversions. I have friends who puked every day for weeks. Really, I got off easy! But I still couldn’t imagine stomaching the healthy foods that are normally a big part of my diet.

Before I knew it, all that sounded good was pizza, pasta, and cheese. There were definitely a few days where I ate pizza for both lunch and dinner. Yikes. Early pregnancy is not a time to be hard on yourself, but I also knew that I could do just a liiiiiiitle bit better.

First things first, I found a prenatal vitamin that I could tolerate. I chose these Rainbow Light Prenatal Petite Mini-Tab Multivitamins

because the one I was previously taking was like a horse pill and I couldn’t swallow it anymore. I’m not normally a vitamin person, but when planning to have a baby or during pregnancy, I’m not taking any chances on baby missing out on proper nutrients.

Even with the vitamin, we still need to eat something besides cereal and pizza, if you can stomach it!

Morning Sickness and Healthy Eating – Can It Be Done?

Tip #1: Take advantage of any times in the day you feel good (or just less terrible)

I really took advantage of the times when I felt good. There were days that if you put a cucumber in front of me at 12pm I would have slapped it out of your hand to get it far, far away from me. But by 3 or 4pm, I might be able to eat it. So I tried not to default to the plainest things for every meal, if something healthier kinda sounded good at the time. One night I was like, hey, I could eat a salad. So I used DoorDash and had one delivered to my house at 8pm on a Wednesday night. I normally wouldn’t do something like that, because $$, but I just wanted to seize the opportunity to get some nutrients (and fiber!) when I could.

Tip #2: Buy a variety foods at the grocery store – even if they don’t sound good at the time

I bought more than usual at the grocery store. Because of different things sounding good at different times of day, I found it was helpful to have a big variety on hand. I had more food waste at the end of the week than usual, but for these few weeks I didn’t sweat it. It’s fine to buy a whole bag of spinach even if you only manage to throw it in a smoothie one day that week and toss the rest.

Tip #3: Give yourself a chance to try something before deciding whether or not to eat it

I asked myself if I could try something before ruling it out. Often times, something didn’t sound good, but if it found its way on my plate, I could at least take a bite. A lot of times if my son was snacking on fruit or veggies, I would say (to myself, in my head, otherwise my son would think I’m weird) “Kacie, can you try a bite of pepper and see what happens?” Usually it ended up being fine. Although, I definitely spit out broccoli one time. You win some, you lose some.

Tip #4: Think about swaps you can make to choose a slightly healthier option

For a few days, I was eating plain white toast. Then I realized that I could totally switch to wheat toast to get some more fiber, and it tasted just as good (and just as plain). Winning! I’m a big fan of Dave’s Killer Bread. I also started using Barilla Protein Plus and Tolerant Red Lentil pasta instead of regular pasta. More protein and more fiber!

Here is a list of some of my go-to (healthier) foods I ate while I was dealing with morning sickness.

Fruit: most fruit sounded good but I especially liked frozen fruit, like frozen bananas and mango. I also ate a lot of pineapple, apples, and clementines.

Protein: Eggs, eggs, eggs. Beyond that, I mostly got protein from cheese, and I ate some chicken — chicken nuggets, or cooked into things like a casserole or a soup. I also sometimes mixed Collagen into smoothies or soup, since it has no flavor.

Some days you wonder if you’re ever going to feel better again, and it can get pretty tough. Just do the best you can and know that the morning sickness will subside soon!

What were some of your go to foods during the first trimester?

Did you have morning sickness (or all day sickness)? How long did it last? 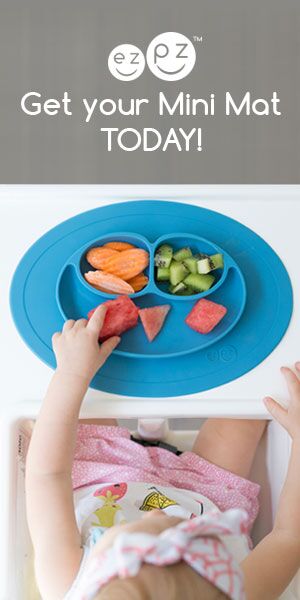 Comments about the size of their baby can be devas

If you’re worried about a cracker being too crun

How to Deal with Burnout as a Mom (Guest: Dr. Ashurina Ream)

How To Feed Your Baby With Confidence

Read for my go-to recommendations to help you feed your baby with confidence, and avoid wasting time searching on Google, especially since it may lead you to bad advice. The hardest time I’ve had so Read more…

The #1 Food To Eat in Your Third Trimester

One of my best friends is pregnant and our due dates are just one day apart. It has been so fun to be pregnant at the same time as her, even though she lives far, Read more…