Almond Milk: Should my toddler drink it? 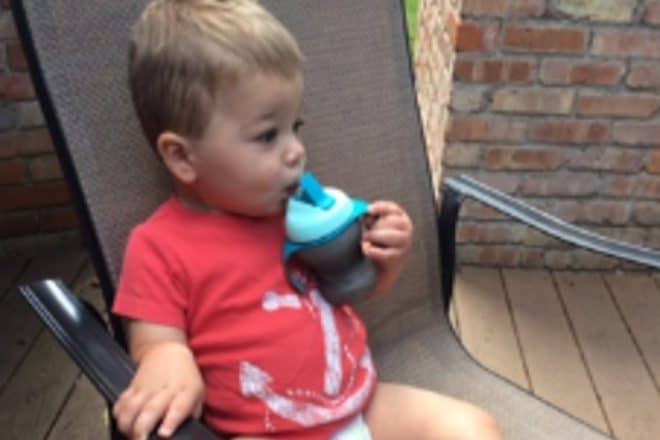 Should my toddler be drinking almond milk? Is almond milk similar to cow’s milk? Read on to learn more.

We typically have at least three different milks in our fridge at any one time. I will admit…I am one of the most indecisive people in the world. It’s nice to have options! But the milk situation just kind of happened.

Here’s the deal. My son drinks either whole milk or 2% milk. I usually buy whichever organic option is cheapest that week. I’m lactose intolerant, so I could just buy lactose free milk for both my son and me. BUT… I really like almond milk in my smoothies. (#highmaintenance) My husband, well he got hooked on coconut milk in his coffee one time when his brother made him try it at Starbucks. So now I buy a carton of coconut milk for him every week.

That’s our complicated milk situation. I buy my son’s milk mainly for nutritional reasons, but for my husband and me it’s more just based on taste!

I know a lot of moms who were hesitant to start their little ones on cow’s milk when they turned one year old. To be honest, I kind of understand why. There is so much talk out there about the potential downsides of dairy. Whether that’s right or wrong is a conversation we can have another day. Today, I want to talk specifically about almond milk. It seems to be the most popular non-dairy milk that I hear about. I hear moms saying they give it to their toddlers instead of cow’s milk. A lot of people assume that since it’s called milk, it must be comparable to cow’s milk.

Almond Breeze has less than half the calories than whole milk. For adults looking to lose weight, that might be a welcome change! But for toddlers, it’s a different story. Toddlers’ main job, besides being super cute and fun (and testing mom’s limits!), is to grow. They need plenty of calories to do that. Toddlerhood is not the time to go low-calorie. Their bodies are growing and brains are developing every day. Replacing cow’s milk or breast milk with almond milk could decrease the amount of calories your toddler has access to. And again, we want them to get plenty of calories at this age!

I’m gonna throw some dietitian-y math at you real quick but it’s simple…so don’t zone out.

My son is 2 years old and about 30 pounds. Using an energy estimation equation for his age and gender, he needs about 1,100 calories a day. Now, a lot of moms probably eat somewhere in the range of 1,200 to 1,600 calories a day. That means your two year old, who is about a quarter of your size, needs almost as many calories as you do. I know, where do they put it all?!?! It never ceases to amaze me the amount of food my son can eat. So again, low-calorie foods are typically not going to be necessary for your toddler.

Now, let’s take a look at the protein content. Almonds are a good source of protein, right? Doesn’t everyone always say nuts have protein? They do have protein, but almond milk, as you can see on the ingredient list above, is primarily water. Water is the first ingredient listed so we know there is more water than almonds in it. So, almond milk is closer to flavored water than it is to cow’s milk or breast milk. There’s only 1 gram of protein in a cup of almond milk compared to 8 grams in cow’s milk.

The protein content may or may not be a concern to you. However, personally, I count on the protein in milk (and yogurt) for my son because he is NOT into meat these days. Even though toddlers don’t have very high protein needs, they still need to get it from somewhere. And if your toddler is practically a vegetarian like mine, you start to run out of options for their protein!

Let’s wrap things up here. I want you to know, I am by no means saying that your toddler CAN’T ever have almond milk. I just wanted to discuss the nutrition myth that almond milk and cow’s milk or breast milk are comparable. While they all have the word “milk” in them, you can see that they really don’t have much in common from a nutritional standpoint.

What if your toddler is allergic to milk or just won’t drink it? No problem at all. There are other alternatives out there that will be more nutritionally similar to milk. The newest one I’ve heard about is Ripple, made from peas (yes…peas).

Has anyone tried it? I haven’t tried it personally but I’ve heard good things, and it does have 8 grams of protein per cup.

Your toddler can grow well without milk or a milk alternative — I just recommend you talk to a dietitian to make sure they’re getting all the nutrients they need.

What type of milk does your family drink?

Do you keep more than one type in the fridge like we do?

Very good stuff. On a similar note, I constantly hear people say drinking cows milk, for kids or adults, isn’t that good for you. Many state there are alternatives to cow milk as humans shouldn’t be drinking cow milk.

Wife says all that’s false. Would love a post on where this myth came from and reasons people should be embracing cows milk (unless they’re lactose intolerant).

You’re my first comment ever! 🙂 haha I have mixed feelings about cow’s milk and people do always ask me about it, so I should definitely write about it. I understand why people might think it’s weird that we drink the milk from a different species, especially as adults. My short answer is that in general cow’s milk does contain a lot of good nutrition but I feel the same way I do about meat – quality matters!

This is so great! We mostly almond milk since my hubby is a little sensitive to cow’s milk (and because he won’t drink skim) and I love it in my coffee, but once we have kids, I’m definitely going with dairy because of all of those nutrients! We drank 100% dairy growing up and I think it’s good for little ones growth!

I’m a mom of two and a Registered Dietitian Nutritionist. I offer e-guides and e-books (go to my Shop page), workshops, brand partnerships, and limited nutrition counseling. Check out my blog for nutrition and feeding tips for your little ones.

Get my FREE Healthy Cereal Guide

Kids can’t control their God given size - and th

When you decide to transition- go all in! Some tod

Moving away from boobs and bottles can make it cha

The research, some recipes, and my top tips on the best food for sick toddlers (and what to do when they won't eat anything!).

It starts off with a simple request (or demand) from your toddler that you give in to, and before you know it, you're experiencing mealtime toddler manipulation!